Are you moving to Antwerp? Situated 55 miles from the North Sea on the Schelde River which, together with the Rhine and the Meuse rivers, forms the biggest estuary in western Europe. Thus, Antwerp is an integral part of a massive harbour complex, one of the busiest and largest in the world. A culture capital, the city of the artists, Rubens and Van Dyck, the world diamond headquarters and a fashion centre, this pocket-sized city has stunning architecture and lovely open green spaces. Antwerp is a lovely city for expats.

Our free, in-depth Moving to Antwerp report includes info on:

This central-western European city is easily accessible, with the outlying suburbs viable for newcomers.  It is easy to navigate and the De Lijn public transport company operates a comprehensive and efficient network of trains, buses, trams and a pre-Metro, or underground/subway trains.  Antwerp International Airport is only 3.7 miles from the city, taking around 15 minutes by car, offering many flights to European destinations.

THE PRE-METRO, TRAMS AND BUSES

Combining underground and surface train lines, the pre-metro is part of the tram system, which comprehensively covers the city and suburbs.  Trams and buses use the same tickets.  The most cost-effective way to travel is to buy a multi-ride Lijnikaart, or travel card, available at newsagents, supermarkets and at the stations.  Single-tickets are valid for one hour and can be used on different modes of transport within the time period.

Operated by NMBS, these are the best option for those who live in the suburbs or who wish to travel long-distance.  Tickets are available at the stations and online.

For those from non-EU countries, drivers can drive legally for one year and may need their original licence to be translated into Dutch or French.  After a year, the expat will need to take a driving test in order to qualify for a Belgian licence.  Drivers in Antwerp qualified as taking the 3rd highest number of hours to commute to work annually in the world, so congestion is not a joke.  Parking is limited and quite costly.

The city’s large cycle lane network, along with the Velo bike hire scheme, makes cycling a popular option.  Bicycles may be collected at one Velo station and dropped at another.

With a fifth of the city centre a dedicated pedestrian zone, walking to work is pleasant in this picturesque city.

Normal taxis are allowed to carry up to four passengers, while taxi buses can take eight for the same price.  Tariffs are required to be shown on the meter, and the driver is obliged to print a ticket clearly showing the name of the taxi company along with a phone number for complaints and queries.

The old city, contained within the 16th-century fortifications, has many old buildings lining winding, narrow streets.  Beyond the old city, and built during the 19th century, the newer part has wider, straighter streets leading out of the centre to some of the suburbs.  The third area, situated on the right bank, is characterised by modern buildings.  The centre is very popular for younger expats to live. 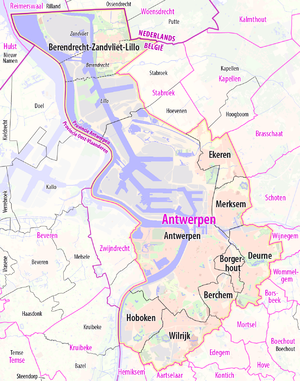 The R10 ring road, a detour around the city, is most popular with expats.  Streets named after the victors of World War I, America, Italy, France and Britain (Amerikalei, Italiëlei, Frankrijklei, Britselei) are actually sections of the N1, which runs from southern Belgium, through Antwerp, northwards to the Dutch border.  Offering easy access for commuters using public transport, close to a variety of entertainment and shopping centres, rentals are high and traffic congestion is a curse.

A busy, vibrant area, Zuid is popular with young professionals needing to live close to work, restaurants and nightlife.  There are lovely apartments with river views, and the area has many monuments, galleries, museums and high-end designer shops.  Public transport is plentiful and efficient, but the area is noisy so may not suit families.

This multicultural area was once inhabited by dock workers and is less aesthetically appealing than the leafy streets in many other city areas.  However, it has retained part of its original character and is ideal for those employed in the industrial districts to the north of the city, whilst being handy for those working in the city centre.  The redeveloped rail yard, now called Park Spoor Noord, has lovely cycling paths and sporting facilities enjoyed by families.

Southeast of the centre, with stunning classic architecture, Zurenborg is split in two by a railway line.  The south-east section, Cogels-Osy, is filled with modern and quirky townhouses while the north-west district has a villagey feel, popular with younger professionals.  Quite an expensive area, but with great transport options, it is far enough from the city centre to be reasonably quiet.  The biggest attraction is the beauty of the architecture and buildings, which appeals to the younger generation.

A mix of modern apartments, lavish villas, detached and semi-detached houses, the area is dotted with castles and fancy hotels.  The main square has a Gothic revival city hall, along with a Till Eulenspiegel fountain.  30% of the area is picturesque nature reservations and wooded areas, but it is only six miles away from the city centre.  Schoten Castle gives the impression of floating on water.

Made up of apartments and townhouses in the main, with a few rental houses in the mix, Deurne consists of 20 different neighbourhoods and is the second-biggest district within the city limits.  Rieverenhof Park is one of Antwerp’s biggest green areas, which appeals to families, along with events, monuments and museums.  Good public transport and a great cycling infrastructure are appealing, but around the Albert Canal area, especially the stadium and along Bischoppenhoflaan can get very congested.

To the north of the centre, over the Albert Canal, this popular area has reasonably priced accommodation and some lovely green areas, but much of it is industrial.  However, transport links are great and parking is more plentiful than elsewhere.  Traffic congestion may be a problem around Berdabaan.  This multicultural area has its fair share of unemployed immigrants and crime is rifer than other suburbs.

Antwerp has a population in the region of 511,000 people who have an annual average disposable income of around 2.5% more than the rest of Belgium.  The Flemish here are more serious and industrious than the Walloons, and they appear to be quieter and more reserved.  Most Belgians in Antwerp speak English, along with Dutch – and maybe some French – so it would be a good idea to learn a local language.  That being said, many people work and live here without knowing a word of Dutch or French.

The massive port area covers in excess of 12,000 hectares, with much of its investment in infrastructure relating to the port’s activities.  Petrochemicals, oil refineries, cargo, diamonds and electricity production all contribute to driving the local economy and have resulted in labour productivity being 13% higher than the rest of the country.

There are four nuclear power plants situated at Doel, along with a conventional power station nearby in Kallo, making electricity generation an important industry.  At the northern end of the port is a wind farm.

There are many world and local banks with branches here, including ING Belgium, BNP Paribas and AXS Bank Europe.  Belgium’s banking system has stabilised after the financial crisis.

Antwerp, driven by the Royal Academy of Fine Arts, is a prominent fashion city, having produced renowned designers including the Antwerp Six.

Antwerp is a city of extreme contrasts, from its winding cobbled streets lined with classical architecture abutting modern buildings, with monuments overlooking the cafés and restaurants.

With a good and affordable standard of living, a low crime rate, a surfeit of culture, a thriving economy and a great choice of accommodation and areas, Antwerp is a lovely city for expats.  Schooling may cause a problem in terms of the waiting lists for international schools, and finding convenient rental accommodation close to your school of choice may cause headaches.  However, using the services of a local, experienced relocation specialist will allay your fears and ease you into the local way of life.