Are you moving to Haifa? The third largest city in Israel, Haifa is a cosmopolitan coastal resort. With a history dating back more than 3,000 years, the locals say “Haifa works, Jerusalem prays and Tel Aviv plays” which attests to the good work ethic and well-run industry of the city. The city is a patchwork of languages, flavours, colours and scenery.

Our free, in-depth Moving to Haifa report includes info on:

Lying 56 miles north of Tel Aviv, this is the major regional centre of northern Israel, constructed on the northern slopes of Mount Carmel.  Built in three tiers, the lowest tier is the commercial and industrial areas, which include the Port of Haifa.  The middle section is on the mountain slopes and is made up of the older residential areas, while the top level is home to the newer, more modern neighbourhoods with great views across western Galilee and the Mediterranean beaches.  This busy city has good public transport, serving the north and north-eastern parts of the country.

This historical city has a few high-rises and skyscrapers, with more approved, or undergoing construction.  Although some buildings are up to 20 storeys high, only buildings under nine storeys are permitted on Mount Carmel currently. 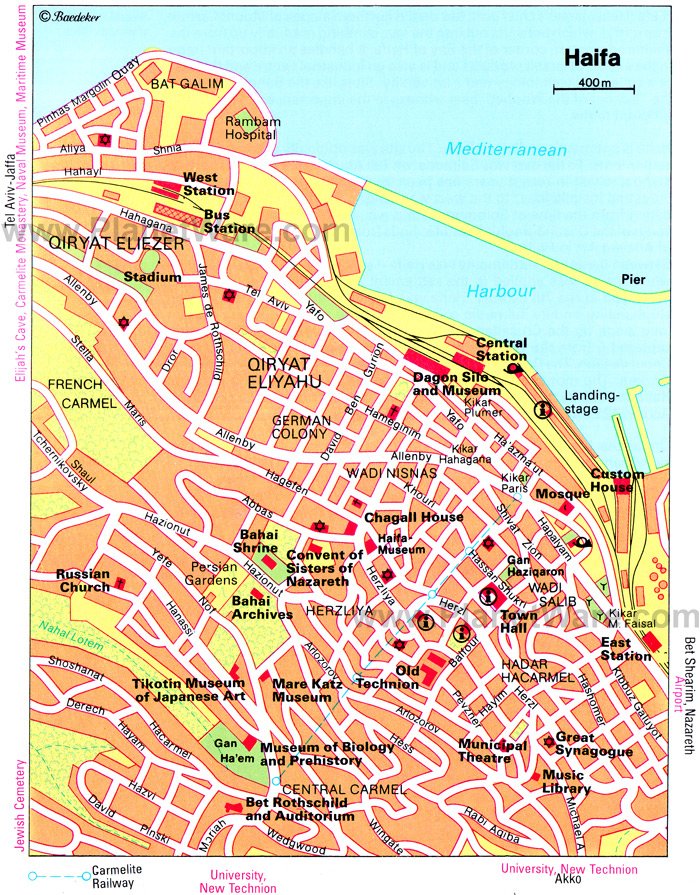 The three tiers that makeup Haifa are as follows:

Tier one is the city’s oldest neighbourhood, made up of Wadi Salib, the Old City centre and the downtown area close to the port.  Wadi Salib is the centre of Arab life in the city today.  The German Colony, built by the Templars is close to the port.

The second tier is directly above the first, the Hadar area, built in the early 1900s.  Hadar HaCarmel is the commercial area and extends around the Arab neighbourhoods and is close to the port.  Upper Hadar or Hadar Elyon is residential and is halfway up the mountain and Ramat Hadar, which is slightly above Hadar HaCarmel.  The Upper Hadar is extremely popular with English-speaking people.

A relatively new suburb, Ramat HaNassi, is located at the southern end of Haifa.  18 new apartment blocks are being constructed here containing over 1,000 apartments, with some of the towers already completed and occupied.  Included in the area will be a municipal elementary school, preschools, a modern commercial centre and a park.  It is also close to the beaches and the MATAM HiTech Industrial Park.

Haifa has around 103,000 households and a population of around 279,600.  Israeli Arabs make up 10% of this with the majority residing in Abbas, Halissa and Wadi Nisnas, with a further 25% being immigrants from the former Soviet Union.  The population is diverse in character with Israeli Jews, Christians, Muslims, Druze and Bahai communities all living in relative harmony.  A large number of Sri-Lankans and Filipinos are employed as caregivers.

The city plays an important role in the economy of the city.  Haifa University, the Gordon College of Education and the Technion attract many international students, while MATAM (short for Merkaz Ta’asiyot Mada) is a lure for high-tech expats, offering in the region of 10,000 job opportunities.  The business park houses international companies such as Motorola, IBM, Microsoft, Intel, Yahoo!, Google, Zoran, Philips and Amdocs, with some having their research and development and manufacturing plants here.  There has been a steady increase in the number of foreign workers relocating to Haifa, mainly to work in MATAM.  The city is a major port and cargo handler and is a leader in passenger traffic.  It is a busy tourist attraction.

Haifa Bay sees heavy industry, chemical processing and petroleum refining at its core.  The city once functioned as the western terminus of an oil pipeline travelling from Iraq via Jordan.

Haifa has a low crime rate and reasonable living costs, glorious beaches and great nightlife.  It has been voted the second-best place to live in Israel.

It is mandatory for each child to attend one year of pre-school, six at primary school, three at lower secondary and three at upper secondary schools.  There are no fees at state schools.  Should the posting be short-stay, then the International School would be recommended.  There is one of these schools in Haifa, where the courses are taught in English from a variety of departments within the University of Haifa, all academically accredited by North American and European universities.

Herzl and Alliance schools are ideal for expat kids who live close to them.  The Riali School, with three branches in the city, is a private school, but the fees are hefty.

The Leo Baeck High School is a popular choice with expats.  It is semi-private and offers a high standard of education.  It is located in French Carmel.

The University of Haifa is a public research university and, along with the Technion, both are respected institutions.

With a high standard of living, superb weather and great choices of areas and accommodation, this busy port city has good schools and further education facilities and an educated workforce.  A thriving economy boosted by high-tech and heavy industries and tourism, with a low crime rate and a reputation as an ideal city for expats, it is little wonder it is highly rated as a place to live.  However, fears of culture-shock are not unfounded.  Using the expert services of a local specialist, all the red tape will be taken care of, giving you and your family time to settle in and get acclimatised.