Are you moving to Seoul? Seoul, the capital of South Korea, is known as the Soul of Asia and it is obvious why.  This is where Buddhists temples and street markets merge with pop culture, high-tech subways, and towering modern skyscrapers.  It is a mega-city as it is home to over ten million people, with around half living in the National Capital Area.  The city is divided into 25 administrative regions, called gu.  Each gu is run by its own government and is divided into several neighbourhoods, each known as a dong.

Education is top class and is extremely important to the South Koreans, the public transport is awesome, and Seoul has the fastest internet speed in the world.  This city just works.  The South Korean currency is the won, KRW.

Our free, in-depth Moving to Seoul report includes info on:

Located in northwestern South Korea, Seoul is divided in half by the Han River.  Historically, the river was a trade route to China but is no longer true as its estuary is on the border of North and South Korea.  The capital is fairly flat as it is on the Han River plain but is surrounded by mountains.  South Korea boasts a speedy, efficient transport system, with makes car ownership unessential.  Connecting most areas to the city, the trains, buses, and a gazillion taxis ensure an easy commute.  The price of petrol is exorbitant.

Motorists tend to bend the law frequently, with scooters driving on the pavement if the traffic is congested.  They will also jump red traffic lights if they can get away with it.

With high standards of accommodation, living space is small by Western standards.  Apartments are furnished with the basics, a fridge, a rice cooker, a two-plate gas burner, and occasionally a washing machine.  Most modern apartments have air conditioning in one of the rooms, generally the bedroom, and some have underfloor heating.

There are three categories of rental accommodation.  Firstly, houses are expensive and as rare as hen’s teeth.  Villas are buildings with up to five storeys, and each contains ten units.  Lastly, are the towering apartment blocks that dominate Seoul’s skyline.  Usually, these are built in clusters of four or eight, with an open area between each.  This is either greenery or concrete, but are well shaded by the surrounding blocks.

Key-deposits or key-money is charged and is very expensive.  This deposit can be close to the purchase price of an apartment.  Low key-money areas are usually those where the foreigners congregate, especially Itaewon.

The newer and more expensive suburbs are south of the river, including Gangnam and Apgujeong, both popular with younger professionals.  The areas north of the river, such as Hannam-dong and Itaewon, have always been popular with expats, and are favoured by diplomats and their families. 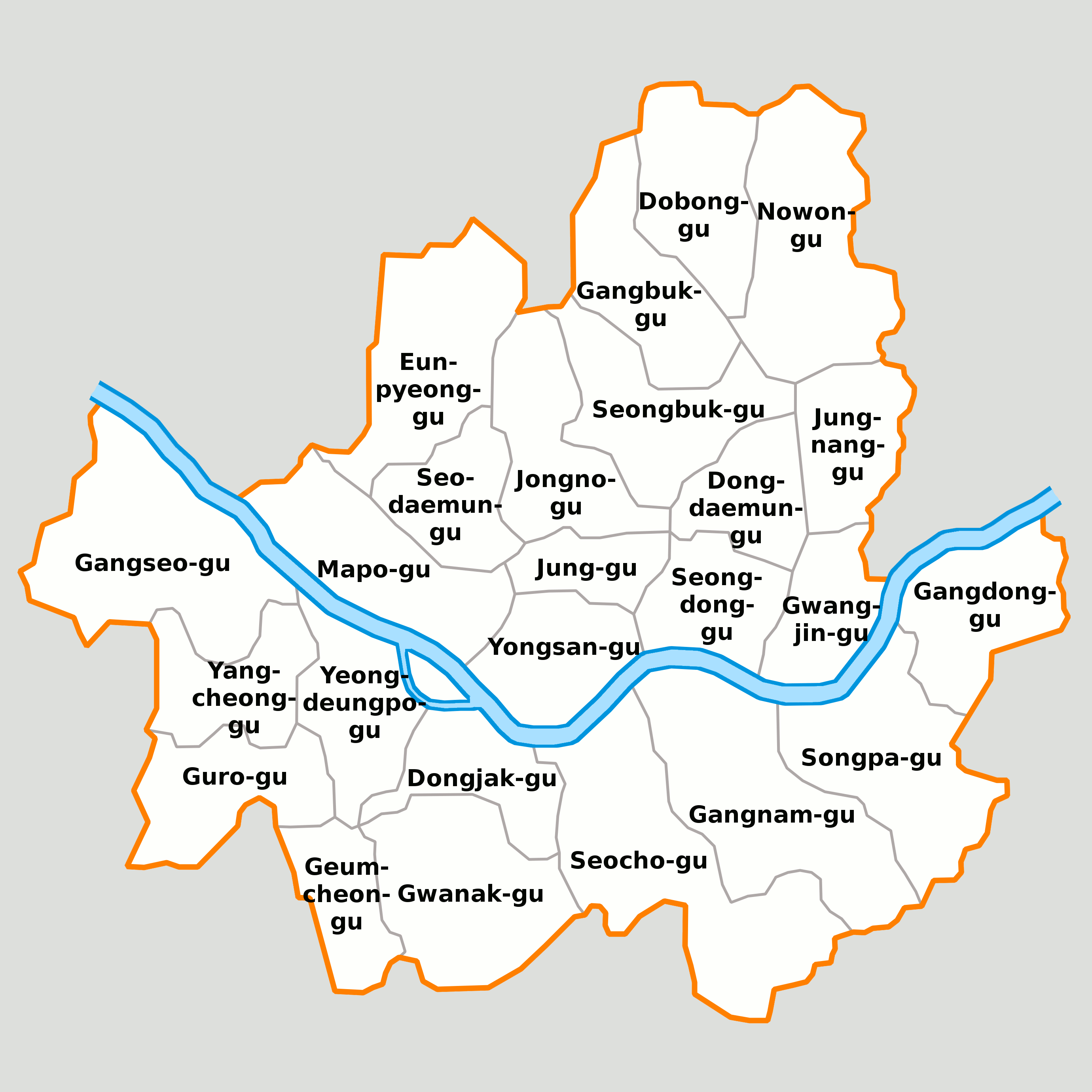 NORTH OF THE HAN RIVER

This is a hilly region with affordable accommodation, including large houses with gardens, apartments and villas.  Public transport is nearby and includes a subway line.  There are a number of good schools serviced by a school bus system.  This neighbourhood has the largest community of expats in the city and has plenty of Western restaurants and other English-language amenities.  Even the shops cater to the expat population.  A good area to consider if you are new to Seoul.

Known locally as Little Tokyo due to the large Japanese community, there is a vast choice of apartment complexes, making it easy to find accommodation.  There are also plenty of authentic Japanese restaurants.

Close to both the US Army Base and Itaewon-dong this area is popular with expats, especially English language teachers.  The community is multicultural.

Close to Itaewon – the expat hub – this is popular with diplomats, and is made up of a residential suburb and the UN Village.  The houses are single-family, luxurious and large, with some apartments available.  Hannam-dong is a 45-minute trip from Seoul International School, and as an added bonus, there are two English pre-schools here.  The school bus service reaches most international schools in the vicinity.

This compound, patrolled by security guards, is peaceful and lavish.  It is close to the German School and a nearby subway line.

Popular with French expats, due to the proximity to the French School, there are a number of rental options here. It is close to the subway and shopping centres and has a school bus system.

The nearby universities attract professors and students alike, while the international schools draw in many families, altogether making this area very popular with expats.  It is also surrounded by mountains, for those who enjoy the outdoors.

Large single-family homes and proximity to the city attracts expats with families to this affluent suburb, but the poor public transport options may make car ownership essential.  There is a school bus to the international schools, but it could be quite a lengthy trip.

SOUTH OF THE HAN RIVER

Increasing popular with young professionals and expats, some of the most expensive property in the country can be found here.

Gangnam-gu is home to many Koreans and has a large foreign community.  Accommodation is mainly apartment blocks, with studio apartments appealing to the young and wealthy.  Surprisingly, many English teachers live here, mainly due to the ease of access to public transport and closeness to some of Seoul’s best schools.

The central area houses many bars, restaurants and offices.  Google, IBM, Toyota and other international companies have offices here.  The Korea International Trade Association, the COEX Convention and Exhibition Centre and the Seoul Arts Centre are also here.

One of the more residential areas, Daechi-dong, is ideal for those looking for a quiet lifestyle but with easy access to the city.

Apgujeong Rodeo Street, lined with upmarket shops and restaurants, is one of the most popular and exclusive shopping streets in the capital.  This affluent neighbourhood has great access to public transport and is in-demand for young professional expats.

Seoul has a population of more than ten million people, is a leading global city, and one of the world’s largest, and it generates more than 20% of South Korea’s GDP.  It is the fourth largest economy in Asia.  The city’s leading industries include IT, finance, electronics, retail and tourism and it has the most bandwidth-per-person, with its digital network the most technologically advanced worldwide.  International headquarters here include multinational giants such as Samsung, LG, Hyundai and Kia.  Growth in domestic demand is slow, but the export market continually shows good growth.  The gross domestic growth is predicted to rise by 2.8% in 2017.

The rapid economic development was spurred by the exacting education system, which has resulted in a highly-educated and motivated populace.

Seoul has a really low crime rate for a city of its size, has the world’s fastest broadband and a fantastic education system.  It has many, many other highlights.  Here are a few of them.

Education here is taken extremely seriously.  Kids start in elementary school, then middle school, and finally high school and the subjects and intensity increases along the way.  An immense amount of pressure is put on high school Korean children, which leads to a high number of adolescent suicides.  However, South Korea’s population have the estimated highest national IQ in the world.  Even the international schools put enormous emphasis on academic performance and Koreans spend three times as much as Americans do on their kids’ education.  Typically, children here spend eight hours a day at school and up to six more at cram schools (hagwons) reviewing their school work.

There are a number of good international schools in Seoul, including American, British, French and German.  Places are limited so you would need to get onto the list asap.  These schools are expensive, but offer education in your children’s home language and follow an international curriculum.

There are three private schools in the city, including Seoul Foreign School.  Also costly, these schools offer tuition in a number of languages, with small classes.

Many foreign parents choose to home-school their kids, due to the intense pressure applied at highly driven Korean schools, along with the high costs of private schooling.

It is really not surprising that Seoul is the favourite choice for expats in South Korea.  It is the educational, financial, political and cultural centre of the country, and combines a rich historical background with fast-paced, high-tech living.  All the amenities are here, from international schools, superb accommodation and area choices to top-quality healthcare, along with a low crime rate.  Also rare is petty theft.  Granted the language barrier may be daunting, and enrolling the kids in schools close to your accommodation could prove tricky.  However, using the services of an expert, experienced relocation specialist, with local knowledge, will smooth the way.  Other services include form filling, lease negotiation, spousal support and much more.