Are you moving to Minneapolis? Although the Minnesota Twin Cities, Minneapolis and St Paul, are one metropolitan area separated by the Mississippi River, Minneapolis has its own downtown or city centre, distinctive neighbourhoods and communities.  Its name comes from mini, the Dakota Sioux word for water and polis, the Greek word for city, which combined means city of waters.  Although Minneapolis is the larger of the two cities, St Paul is the capital of Minnesota.  Renowned for its educational system, Minneapolis is the 3rd most literate city in the US.

Our free, in-depth Moving to Minneapolis report includes info on:

Minneapolis is located in Hennepin County, in eastern Minnesota on the Mississippi River, close to the Wisconsin border.  It is part of the Midwest, in the northern central part of the USA.  The Twin Cities are fairly isolated in terms of large cities nearby, so a good public transport system is essential.

A law was passed in 1976 requiring local governments to plan for affordable housing.  This was enforced in the Twin Cities, building low-income housing throughout the fastest-growing suburbs, 70% of them in the wealthiest districts, resulting in very little “snob value” in the suburbs.  45% of residents live in family households. 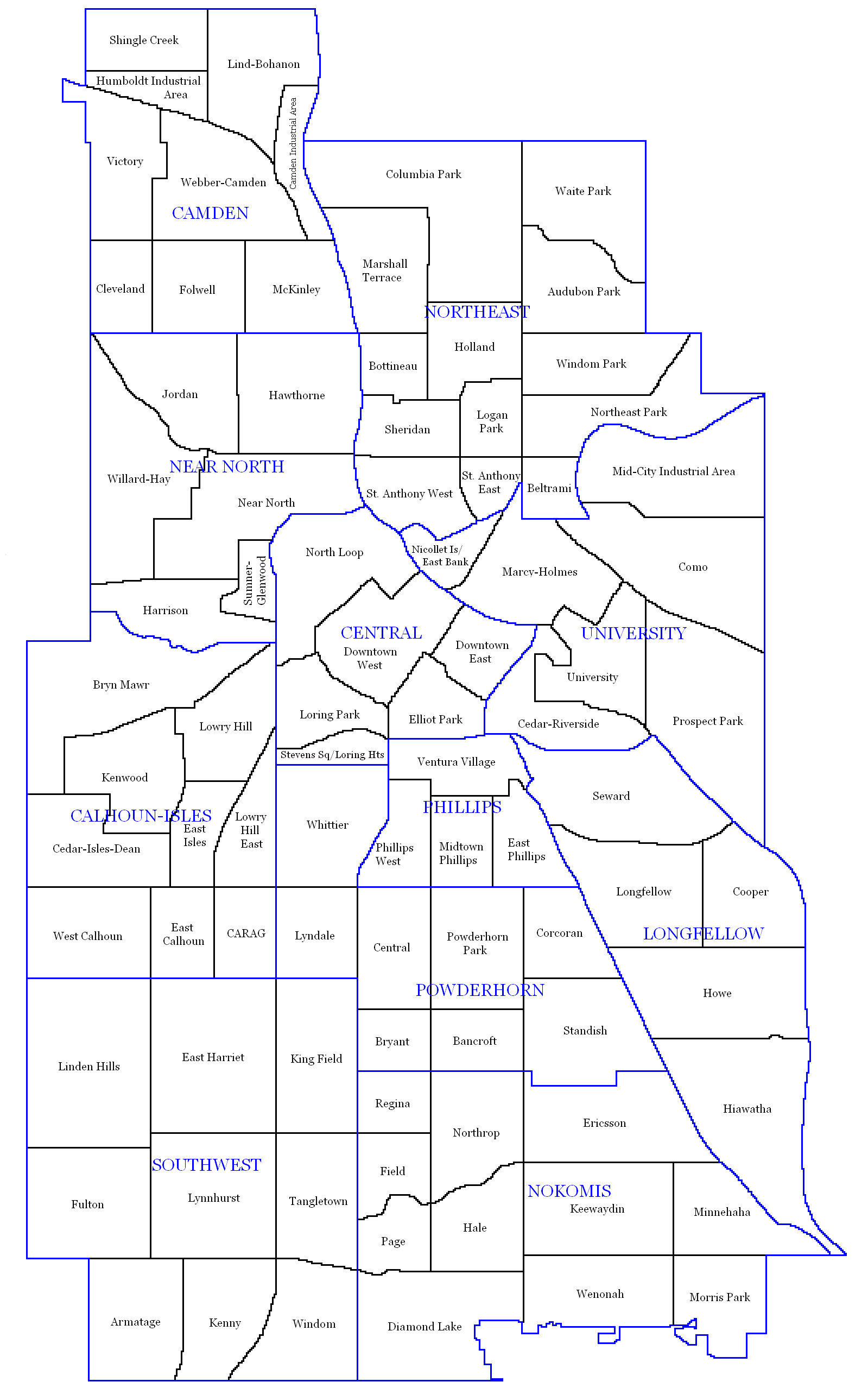 The large residential population in the downtown area lives mainly close to the Mississippi River, in high-rises, apartments or condos.  Some are newly constructed, others are warehouse conversions.  As per the norm, living in the city centre is pricey, especially those closest to the river.

West of the city centre, converted warehouses and industrial buildings, along with some newly-built rowhouses and apartments, North Loop has been nicknamed the Warehouse District.  Its name comes from the days when a tramline served the area.  Target Field, home of the Minnesota Twins baseball team, attracts new bars and restaurants to the locality.  Housing is still relatively inexpensive, but this upscale sector is on the up-and-up and prices will rise.

Consisting of Whittier, Bancroft, Standish, Central, Powderhorn Park, Lyndale and Corcoran, this community is south of the city and is bisected by the I-35W freeway.  The areas on the western and eastern sides of this highway are very different.  On the west side, Lyndale and Whittier have transformed from depressed areas to fashionable suburbs.  Home to Eat Street, which is a length of Nicollet Avenue with a multitude of ethnic eateries and the Minneapolis Institute of Arts, each side benefits from its proximity to the city.

On the eastern side of the road, Central and Bryant and the western side of Powderhorn Park have lower housing prices but higher crime.  It is popular with artists and hippies.

Standish, Bancroft and Corcoran are much quieter residential neighbourhoods, consisting of single family homes and multi-family housing.  Prices here are lower than average.

Older houses, mainly built before WWII, this area is almost all residential, middle class with affluent pockets and is more expensive than the average in Minneapolis.  Included in the area are Windom, Armatage, Tangletown, East Harriet, Lynnhurst, Fulton, Linden Hills, Kenny and King Field.  Bang in the middle of Southwest, prices increase the closer the accommodation is to Lake Harriet or Minnehaha Creek.  Mainly single-family homes, with a higher than average cost, are found in the suburbs of Lynnhurst, Linden Hills, Fulton and East Harriet.  Linden Hills is more industrialised with an up-market commercial district and large shopping areas.  Tangletown – named for its twisting streets – is quiet as there is no through traffic, with larger, up-scale houses.  Windom, Armatage and Kenny also have larger houses, but as you go further south smaller houses, built in the ‘50s and close to Highway 62, are cheaper.  The extreme south experiences airport noise, with King Field offering more affordable accommodation.

This affluent, upmarket area is southwest of the centre and is close to Uptown, the residential part of the city.  Three lakes and the local nightlife, along with popular restaurants and bars, are here.  The closer one is to the lakes, the more expensive the housing is.  The nine neighbourhoods are made up of large houses, elegant and not-so-elegant high rises, with prices ranging from moderate to expensive.

This picturesque area has 17 lakes, 37 parks and 200 miles of pavements and trails.  It has appeared on Money’s best places to live many times, including reaching the top spot once and 2nd place in 2016, and 95% of the residents polled gave their area a good or excellent rating.  Eco-friendly homes and a self-sustaining economy keep the area green, the area has 62,000 residents and local businesses offer 57,000 jobs.

With skyrocketing growth, Woodbury has a diverse population, various housing types and it’s a quick commute into the city.  This community was planned and cleverly developed according to a master plan, which is now 75% complete.

Woodbury recently spent $22 million upgrading the Bielenberg Sports Centre, and this multi-use facility is one of the largest in the state.  Two indoor ice rinks and one outdoor, a 90,000-square foot indoor track and field house and 36 outdoor athletics fields are some of the sporting areas.  This city also has a booming health and wellness industry.  Anytime Fitness has a newly built corporate headquarters here, and along with a few orthopaedic clinics and other health care facilities, they pull in patients and employees alike.  3M is right next door in Maplewood.

Easy access to the city, a thriving job market and first-rate schools make Edina, in the inner-ring, a great place to live.  It has its own downtown, 50th and France, which is home to almost 200 restaurants and business.  Edina hosts the 2nd largest art fair in summer.  The 40 parks, plus Centennial Lakes Park with lawn bowling and paddle boats offer an escape from the hustle and bustle.  The Edina Aquatic Centre offers a surf simulator and pirate rides, and once winter sets in, twelve outdoor ice rinks are open to the public.  Housing prices are well above the average, but plenty of jobs and employers are here.

Reaching fourth place in Money’s rankings in 2013, Chan – as it is known – has 34 parks, 90 miles of trails and the massive Minnesota Landscape Arboretum.  In the depths of winter, the February Festival showcases sledding, cookouts and ice-fishing competitions.  On the outskirts, the area shot to fame in 2016, and Paisley Park became an instant monument to the talent that was Prince.  The local cinema has a purple mural and the residents reckon the spirit of a dove rests here.

Just five minutes will get you onto major highways, with less than a 30-minute drive to the airport and the Mall of America. Housing is mainly single family, with both very large and medium family size.

With a population of around 417,000, the growth in international residents shows that one in 14 residents have moved from India, Mexico, Somalia and Laos.  There are in the region of 83,000 people of German descent, which equals 23% of the population.  The Scandinavian-American numbers reach 39,000, made up of Swedes and Norwegians.

Minneapolis is 12 miles west of St Paul and was once known as the Flour Milling Capital of the World.  Architecture is a mix of contemporary skyscrapers and historic buildings.   The Twin Cities host headquarters for 19 Fortune 500 companies including Target, UnitedHealth and General Mills.  40 Minneapolis companies have made it onto the list in the last 60 years. High-technology industries are also integral to the local economy.  The University of Minnesota and other local academic facilities provide well educated engineers and scientists and applied research, and in excess of 1,300 high-tech companies in the US were developed here.  The Twin Cities are the financial centre of the upper Midwest regions, with seven of the largest financial institutions and banks based in Minneapolis.

With a low crime rate, plenty of green areas, lovely accommodation and good salaries, once people move to Minneapolis they are very unlikely to leave.

Renowned for its educational facilities, Minneapolis is a great place for expat families.

The Twin Cities encompass 332 public elementary, middle and high schools which are fee-free.  41 high schools are listed on the best high school rankings.  Schooling works on the catchment system so it is important that you choose your residential area carefully.

There are 266 private schools, which offer a better level of education but are expensive.  These include The Blake School, Brock School and Mounds Park Academy.

There are eight universities and a number of colleges.  Dinkytown is home to the University of Minnesota.

Three international schools cater for families who are always on the move, ensuring that their children receive an ongoing, consistent education.  Places should be booked well in advance.

Residents claim that they feel especially safe in the suburbs, but they exercise caution in the downtown area at night, as is the case in most big cities.  The education system is excellent and there are magnificent green spaces and lakes, with plenty for children to do.  Minneapolis is sports mad, and very family-centred, so sporting activities are encouraged.  There is excellent accommodation in a variety of suburbs with plenty of choice in housing, ranging from massive single-family homes to high-rise apartment living and everything in between.  The thriving economy, with its strengths in manufacturing and finance, is a draw-card for expats.  Moving to this city probably gives you too many good choices, so using a relocation specialist is advised to guide you through any pitfalls along the way.