Are you moving to Lyon? Ranked 7th in the best places to live in the world, Lyon was the silk capital in bygone days and is now the gastronomic capital of France.  Founded in 43 BC as a Roman colony, its original name was Lugdunum, which means hill of the light.

This UNESCO World Heritage Site is famous for both architecture and its historic landmarks.  The second-most populous metropolitan area after Paris, Lyon’s average labour productivity level exceeded that of the rest of France by 21% in 2016, mainly due to the prevalence of R&D companies and high-value industries.

Our free, in-depth Moving to Lyon report includes info on:

Situated in east-central France in the Rhône-Alps, Lyon is positioned between Marseille and Paris.

Shaped by its two rivers, the Saône (to the West), and the Rhône (to the East), both of them running north to south, they converge south of the city centre, forming a peninsula.  Bounded by two large hills, one to the west, the other to the north, with a large plain sprawling eastward from the city centre, the original old city, or Vieux Lyon, was constructed on the west bank of the Saône.

The city is divided into nine arrondissements or administrative divisions, and it boasts an excellent public transport system.

This sprawling city is the second largest in France in terms of overall size, following closely behind Paris.  94% of housing in Lyon is in apartments. 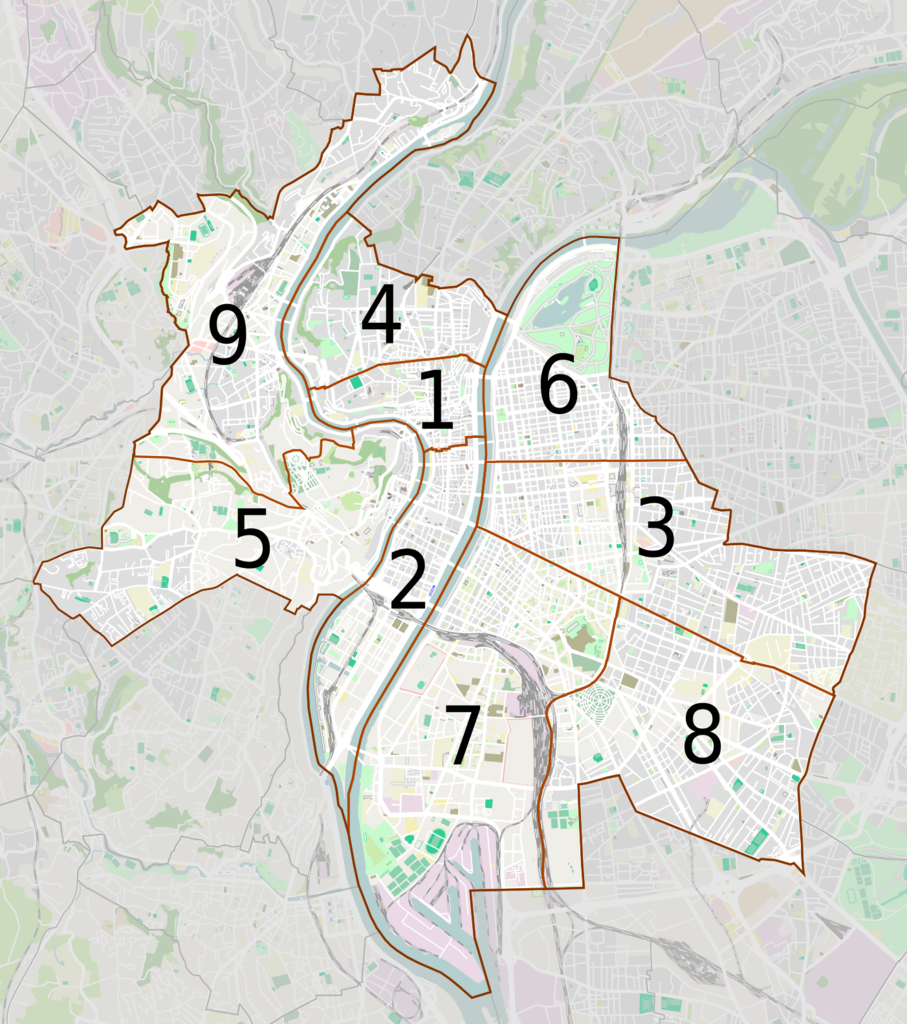 This elegant area, wedged between the two rivers – Presqu’île means “almost an island” – accommodates those looking for an urban existence, with large 18th and 19th century houses.  Within walking distance are markets and restaurants a-plenty, but the traffic is very congested and parking is extremely expensive.  A vibrant nightlife, top class restaurants and exclusive shopping suits young singles and couples.  Rue Mercière is the place to be for foreign and exotic eateries.

Vieux Lyon, or Old Town, is a UNESCO World Heritage Site and is one of the largest renaissance neighbourhoods in the world.  It may be old, but it is not sleepy, despite the quaint buildings.  Pubs and bars line the streets, and to discover why Lyon is the gastro capital of France, visit the restaurants in the world-famous Bouchons Lyonnais.

This unique area is known as “the hill that works”.  It was once home to the silk trade, but has undergone gentrification and is similar, but smaller, than Montmartre, almost a village on its own.  Aloft on its own hill, Croix Rousse is a trendy and artistic suburb, with winding streets, markets and parks, good schools, and plenty of bars and restaurants.  A network of traboules, which are secret passages between buildings, can be found here and in Vieux Lyon.

This peaceful area is known as “the hill that prays” and is home to the Basilica of Notre-Dame de Fourvière, towering over the city.  The locals enjoy several parks, including Parc de la Visitation and Parc des Hauteurs, both enjoying breath-taking views of the city.  This tranquil and picturesque suburb is one of the premier family-centric areas in the city.

This is Lyon’s most expensive area offering a safe environment to bring up a family.  The magnificent Parc de la Tête d’Or, with a botanic garden, paddle boats on the lake and a free zoo offers good family fun.  This quiet, prestigious area also has its fair share of cafes, shops, restaurants and bars.

Highly underrated, this area suits those who have budget restrictions, students and people who want to live near the city centre.  There are 3 universities: Université Lyon 2 and 3 and the Sciences campus all located here.  A more culturally diverse population, with alternative restaurants catering to those with specialised diets, and more laid-back pubs and bars, appeals mainly to students and singles.

This is the 2nd largest city in the metropolitan district and was once elected the city with the best administration in the country, which attracts more and more people to the area.  Serviced by the Lyon TCL transit system it has a metro line and tramlines and is only 5 miles from Lyon.  The variety of colleges and universities are mainly located on the La Doua Campus, which is home to the Claude Bernard University, CPE Lyon and the Institut National des Sciences Appliquees de Lyon.

A major centre of business with an impressive reputation for excellent cuisine, the city has a population of around 1,636,000 while the wider metropolitan area is home to 2,2 million.  Around 13% of the population are foreign-born and are not French citizens.

Lyon has a major industrial area, with many chemical, biotech and pharmaceutical factories and facilities.  It is also home to a large software industry – mainly video games.  The Lumière Brothers created the first motion movie here in 1895, thus making Lyon the birthplace of cinema.

Lyon, due to its location and easy access to the rest of Europe, is economically the most dynamic city in the country.  A qualified workforce, cheaper real estate than Paris and the availability of the many research centres, all add to its attractions.

Lyon is a major commercial centre, hosting innumerable international conventions, and has given its name to one of France’s biggest banks, Crédit Lyonnais. All the major banks are represented here, along with large automotive plants, including Renault.  Both Interpol and Euronews have their head offices here.

It’s not surprising that Lyon features in the top places worldwide to live.  With a low crime rate, great salaries and opportunities, and enough history to keep you amused for years, this ancient Roman town has mysteries and attractions for you to unfold.

With its mass of culture, entertainment, exquisite architecture, great quality of life, and an amazing history, Lyon is the perfect city for families and singles alike.  The Old and New Cities have distinct differences, with apartments homed in converted, nostalgic houses.  The green areas offer an escape from the city, and the close proximity to the mountains make getting away from it all very easy.  There is a good choice of accommodation in vastly different areas, with great shops and markets nearby.  The skilled workforce, low crime rate, efficient public transport system, and the strengths in finance, industry and software make this an excellent city for expats.  Moving your family can be quite traumatic, especially when it is to another country.  Employing the services of a relocation expert, with an in-depth knowledge of local conditions and the ever-prevalent red-tape, will ease you and your family into your new life with the minimum of fuss.