Are you moving to Barcelona? Spain’s second city, after the capital Madrid, Barcelona is solidly positioned amongst the best cities in the world to do business with.  Education standards are high, and it is one of the greenest cities in Europe.  It is also one of the world’s leading tourism centres, with an influence in commerce, media, entertainment, science, fashion and the arts all contributing to its standing as one of the major global cities.

Our free, in-depth Moving to Barcelona report includes info on:

Surrounded by the Mediterranean, mountains, hills and vast green spaces, Barcelona is heavily influenced by its Catalonian heritage, with many ornate, exquisite historical buildings and architecture, some dating back to Roman times.  Located on the east coast of Spain, the city is 125 miles south of France, on the Costa Dorado between two river mouths, the Besòs and Llobregat.

Traffic congestion is a massive issue in Barcelona, so public transport is the obvious choice.  Most of the transportation services are included in an integrated tariff system, with one fare applicable to the Metro, trams, buses and the regional RENFE and FGC trains.  Customers will be charged for one unit or trip for a journey lasting less than an hour and fifteen minutes.  Public transport is efficient, reliable and safe, and is generally quite inexpensive.  You could even rent a Vespa scooter and scoot past all the stationary traffic.

The AVE train network in Spain is second only to China in the distance covered, and although more expensive than normal trains, the trains are super-fast.

The Metro has six subway lines and one funicular and is the best choice for travelling quickly and worry-free, and tickets can be bought at stations and ServiCaixa ATMs.

The bus routes are complex with over 100 routes.  This is the best bet for almost door-to-door service.  Tickets may be purchased from the driver or using monthly passes or travel cards bought at Metro stations.

The trams operate on a zero-emission system, with coverage reaching areas not covered by the Metro.

RENFE trains link to some of the surrounding towns, with some stations connecting with the Metro.

Taxis are plentiful and the rates are not unreasonable.  The drivers are generally friendly and reliable.

Walking is a pleasure, with the mild climate and interesting medieval alleys.  Care should be taken after dark in some areas, and the threat of pickpockets is high.

Cycling is a work-in-progress as the city is continually improving the bike lanes.  Bicycles may be carried onto the trams, the Metro and FGC, if space permits.  Bicing is the popular bike-sharing service.  A pre-purchased membership card is inserted at the bike stand, and again at the destination where the bike is dropped off.  Charges depend on the length of time the bicycle is used for, as long as it is less than two hours.

Living without a car in Barcelona is a viable option, with its limited and expensive parking, heavy congestion and the high chance of the vehicle being dented whilst parked.  A community sharing programme called Avancar allows drivers to hire cars for shopping purposes, weekends away, or whatever the reason, and can be booked online.

Accommodation costs are in line with the rest of Europe but competition to find a home is nowhere near as bad as Amsterdam or London.  Of course, families would want to be close to schools, with quick transport to work and young professionals prefer close proximity to the nightlife. 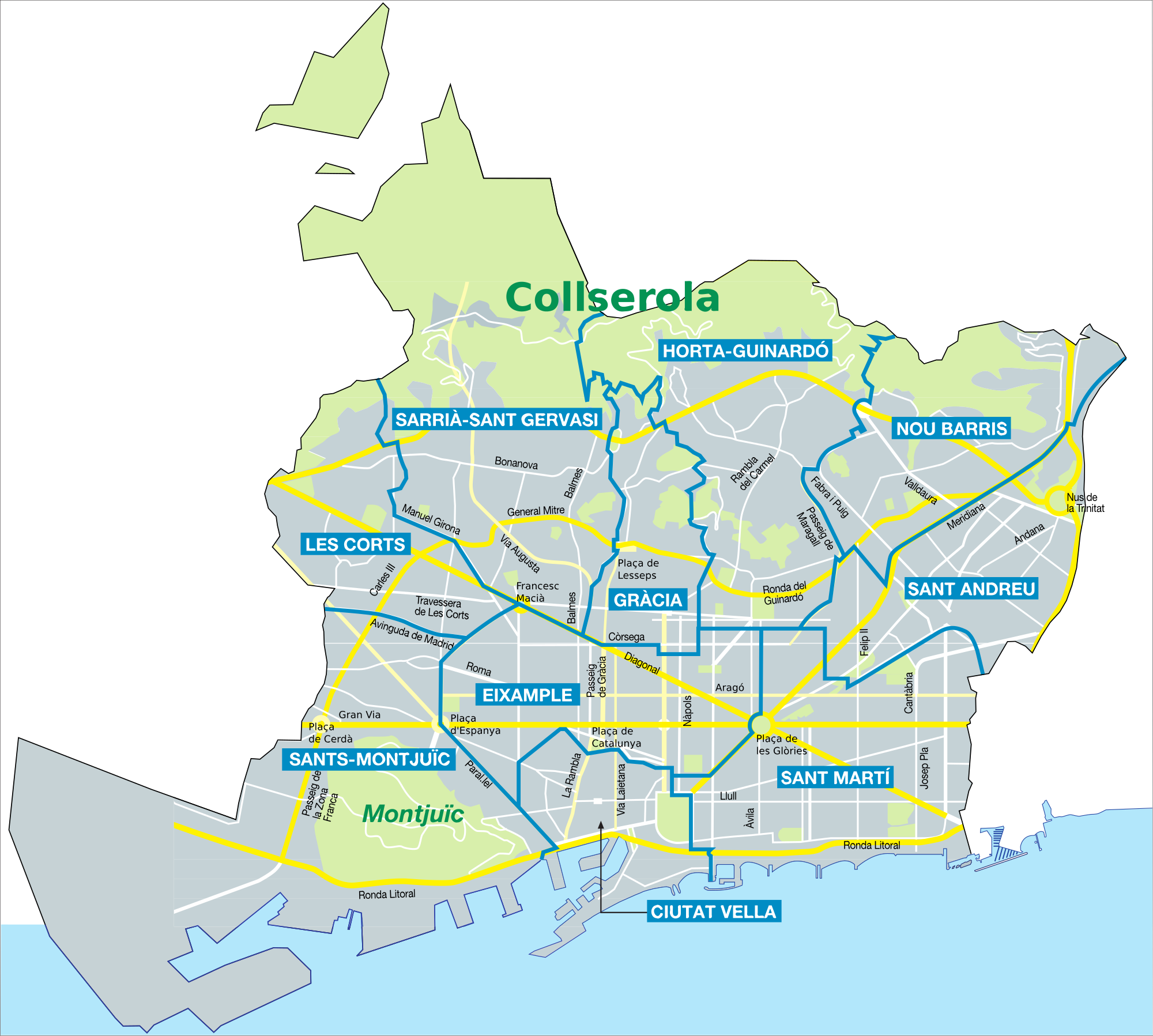 Built as the athletes’ village for the ’92 Olympics, this definitely suits the younger, single expat.  Close to the port with its restaurants and bars and within easy reach of the beach, this busy area features apartments of around three to four storeys high, with communal swimming pools and gardens.  Expensive for what you get, the area has its own shops, supermarkets and cinemas and is close to work on the Metro or bus.

Close to the old city, this busy area has a vibrant nightlife with great transport links.  Apartments don’t have garages; but sometimes parking can be arranged at nearby parking garages.  There are very few parks and the distance to good schools is considerable, so the area is not very family-friendly.

Plenty of green areas and close to the American School of Barcelona, car ownership is essential to get to the city, as the buses take over an hour.  There are no metro or train stations in either suburb, which border each other.  Supermarkets and shops service the areas, tennis clubs and horse riding provides family entertainment, while the annual kart race in Sant Just is a major event.  These go-carts are self-driven by the driver and a runner, and the race is all downhill.

One of the most elevated parts of Barcelona, this is also one of the most elegant.  Low-rise estates and big gardens are the order of the day, exclusive, luxurious and expensive, suited to families.  Apartments generally have parking bays for two cars, and transport links aren’t great, so car ownership may be necessary, which could be off-putting to the younger expat.  The area is self-sufficient, with supermarkets and shops.

Another elegant residential area with open spaces and grand avenues, the architecture is mainly from the 1970s.  Garaging for two cars, a swimming pool and even a doorman are the norm. This family orientated area has playparks, a miniature train, and areas suited to cycling and jogging.  There are a few shops and restaurants, the Metro stations are few and far between, but it is close to a number of the best English-speaking schools in the city.  However, the bus network is reliable if not well developed.  Car ownership is highly recommended, the neighbourhood is safe, but it is expensive.

For those wanting to live the high life, but within a budget, Sarria is to the east of Pedralbes.  Less upmarket but still pleasant, the shops and restaurants are more plentiful, while the choice of accommodation ranges from more modern to older apartment blocks, still with doormen.  There are a few detached and semi-detached houses in the north, in picturesque hilly streets.  Bus services are good, and the FGC train connects to the city.  Parks, play areas and international schools all make this a family-friendly suburb.

One of the most central areas in the city, with plenty of shops, restaurants and bars, rental costs are quite low.  Transport links are good but parking is difficult, although most apartments have parking spaces.  This quaint and quiet suburb is home to Collserola Natural Park, the biggest metropolitan park in the world, which envelops the Sant Gervasi neighbourhoods of Les Planes, Tibidabo and Vallvidrera.  Walking to work is relatively easy from this central district, and the John Talabot school is nearby.

A popular area with French and American expats, this area of natural beauty has the Parque Central located in its centre.  Located seven miles to the north of the city, the frequent trains take around 20 minutes to zip into town.  Fully sufficient, the standalone houses with their gardens and swimming pools are ideal family homes, along with sports clubs, shops, cinemas, a golf course and the Benjamin Franklin International School close by, running its own bus service for the local students.

These beach suburbs are twelve miles to the south of the city, but the British School of Barcelona is in Castelldefels, trains are frequent into the city – and take only 20 minutes, and there are several shopping malls a 15-minute drive away.  It is busy at weekends as the beaches and the seafood restaurants are local favourites.

Barcelona’s population stands at around 1.7 million, with the metropolitan area being home to around 5 million people.  The second-largest city in Spain, non-nationals make up around 18% of the total population.  The largest minority group are made up of Italians, followed by Ecuador, Pakistan, Bolivia, Peru, China, Morocco, France and Columbia.

Tourism is the biggest economic driver with Barcelona being the third-most visited city on the continent.  The service sector employs a massive 88% of the population.

Barcelona accounts for a quarter of the country’s GDP.  With sea-going container traffic hitting record highs recently, it is one of Europe’s most significant ports.  It is particularly strong in the motor vehicle industry, electrical engineering, wine production, publishing and consumer goods.

Like the rest of Europe, Barcelona has a low crime rate, good economy, affordable housing and massive green areas.

The fabulous climate, beaches, huge green areas and quality of life make Barcelona an extremely popular destination for expats and their families.

With its incredible climate, great beaches, cultural attractions and distinctive architecture, expats will love living in Barcelona.  Accommodation is of a high standard, with a variety of interesting and different areas to choose from.  English is widely spoken, although it would be an advantage to learn Spanish.  The difficulties in enrolling at schools and universities, negotiating leases, arranging removal companies and general form-filling can be negated by using an area expert, a relocation agent with experience in the vicinity.