Are you moving to Helsinki? Founded in 1550, the port city of Helsinki is the most northern capital on the European continent.  Whilst it is a bilingual city, with Finnish and Swedish being the most spoken languages, most of the population speak English as well.  With a well-earned excellent reputation for education, Helsinki is the most populous municipality and urban area in Finland, a country known for wild reindeer, the Northern Lights and icy lakes and, of course, Lapland, in the far north of the country, home to Santa Claus.

Our free, in-depth Moving to Helsinki report includes info on:

Finland is sandwiched between Russia and Sweden, with Helsinki located in the south on the shoreline of the Gulf of Finland, only 55 miles across the gulf from Tallin, Estonia.  Helsinki is a small, attractive city with outstanding architecture and is located in the province of Uusimaa.  With an abundance of parks and green areas, the public transport system is efficient, safe and well organised.

Helsinki is a small city – some say it is a large town – with its most expensive real estate closest to the downtown area and the esplanade.  Of course, moving further out to the suburbs is cheaper and the properties are larger.  Gentrification is happening in the capital area in the traditionally rougher districts.  For example, a former industrial area, Vallila, has seen an influx of people and gentrification in the last 20 years and showcases early 20th-century beautifully renovated houses.  The central areas can be categorised: the design district of Designkortteli, shopping and beaches at Kauppatori, the hustle and bustle of Kampii, nature in Toolo, and hipsters in Kallio.

In rented accommodation do not expect to find carpets, curtains or any lights other than kitchen and bathroom lights.  You will, however, find a fridge/freezer and a communal sauna.  Furnished or serviced apartments are generally in good condition, and include utilities, broadband, and full kitchens with modern appliances.  Cleaning and linen services may be included.  Finding adequate housing can be time-consuming and confusing, but using the services of a relocation specialist will be extremely helpful.  Accommodation is generally in the form of apartments, while free standing houses being difficult to find in the city.  Larger family houses with gardens generally involve a long commute to work.

Rentals do not stay on the market for long, so you need to snap them up quickly.  There are an estimated 120,000 expats living in the city. 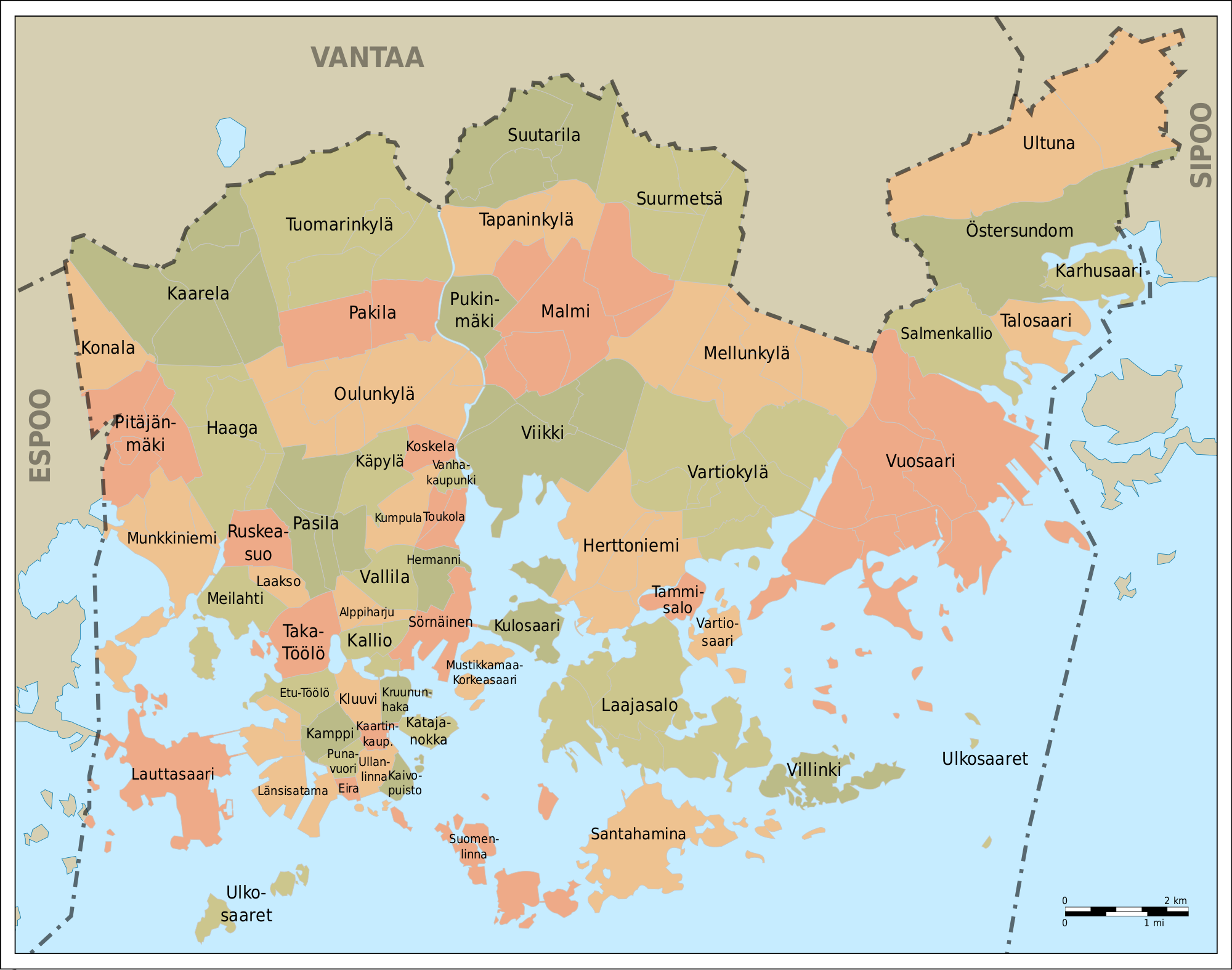 Kaartinkaupunki is in the centre of Helsinki, this area is extremely expensive and close to the Esplanade.  A quiet area housing the well-heeled, it is one of the wealthiest and oldest parts of the city.  The Jugend, gothic-looking buildings date back to the early 1900s.  Climb the hill in Kaivopuisto and take in a great view of the harbour.

Töölö is a vibrant area, home to trendy cafes and boutiques, set against the backdrop of Töölö Bay, forming the sprawling north of the city centre.  It even has its own local market square and is within walking distance to the city.  It is home to the Finnish Parliament House and was the site of the first town planning competitions to be held in Finland.  Töölö comprises Taka-Töölö and Etu-Töölö.

Kamppi is in the very heart of the downtown area, close to public transport, and very popular with expats.

Punavuori is within walking distance to work, but the rentals are lower quality than Kamppi.

Eira, Kulosaari and Kaivopuisto are more expensive areas in the exclusive embassy areas.

Viikki is close to downtown and includes the Vanhankaupunginlahti Nature Reserve and some of the best parks and natural areas in Helsinki.  It is great for families, close to good schools and the university.

Tammisalo is 10km to the city.  It is an expensive but popular residential area.

Kallio, at the eastern end of Helsinki, is one of the most densely populated areas in the city and has undergone a major facelift.  Boutiques, trendy cafes and lower rental prices attract a diverse, young entrepreneurial population.  It should be noted that as a previously low-cost area, the apartments are small.  It is popular with students and has handy tram connections.

Kartanonkoski, a leafy suburb may be too far from the city for some, but this quiet area is ideal for families who need to be near an international school, with good bus links into the city.

Arabia is a new area with good bus and tram connections.  The annual Arabia Street Festival, held in May, celebrates the colourful living space, street art and urban culture, giving an insight to what urban living in the capital may mean in the future.

Hietalahti, close to the harbour features modern apartment blocks with good views.  To the south of the city, this area hosts the most popular flea market in Helsinki, the Helsinki International Bible Centre and a couple of good seafood restaurants.

Helsinki’s Silicon Valley, Ruoholahti has modern buildings and is popular for expats.  A distinctive neighbourhood, built along the western seafront, the businesses rub shoulders with canals and unique shops.  Great transport links to both the capital and Espoo make this well suited for commuters.

Both within walking distance to the CBD, Kruununhaka and Katajanokka are quiet residential areas, with good transport links.  Ullanlinna is an up-market area near to the ocean, with tram connections to downtown.

Haukilahti is just a ten-minute bus ride to the city.  It is popular amongst young well-to-do families.  Lauttasaari is an island between Espoo and Helsinki and is a very popular family area with expensive villas along the seafront and good bus connections.

With its highly industrialised free market economy and high standard of living, Helsinki attracts expats in the IT and healthcare sectors.  Finland’s main industries include metals, wood, electronics, telecommunications and engineering.  Agriculture is mainly limited to maintaining self-sufficiency in basic crops, due to the harsh climate.  Exports account for nearly one-third of the GDP, so foreign trade is vitally important.  Unemployment stands at around 10%.

The biggest employer in the country is the City of Helsinki, with around 38,000 employees.  While the City employs biologists, doctors, lawyers, engineers and planners in many fields, the most common employment-types are in early childhood education, social services and health care.

Helsinki, and Finland, consistently maintains the highest standards of environmental sustainability and protection.  It has a strong, vibrant democracy and tops a multitude of other countries in terms of press freedom and a lack of corruption.

The country’s excellent economic performance is attributed to its high standard of education and sophisticated infrastructure.

Helsinki has really low crime rates, living costs in line with salaries, and consistently remains one of the best places in the world to live.  The area of the city is made up of two-thirds of the Baltic sea and only one-third of land.  315 islands make up the sea area.  Many Hollywood movies were filmed in parts of the city that resemble St Petersburg, including Gorky Park.

With one of the highest standards of education in the world, expats will appreciate such a remarkable learning culture.  The proven record of academic excellence and a special culture of more individualised attention helps kids reach their full potential.  There are no private schools here, even the president’s children attend public schools.  The admissions criteria differ from school to school, but it is a given that birth certificates, report cards, residence permits, immunisation records and proof of identity will have to be produced.  Public education is free in Finland, including university.

Lessons are taught in Swedish and Finnish, so these schools should only be considered if the job posting is long term.  The high standard of education throughout the country ensures that there is little difference in education from one school to another, with the exception of international schools.

This is the preferred option for most expats, with the advantage of a familiar curriculum for the children.  There are a number of international schools in Helsinki but many of them are over-subscribed with long waiting lists, and the fees are high.

Housing supplements are available for university or college students living in rented accommodation.

Education and the well-being of the youth is important here, so there are many activities and attractions for family days out.  These include theme parks such as Linnanmäki, the Serena Water Park, Harakka Nature Centre, Seurasaari Open-Air Museum, Helsinki Zoo and Children’s Town in the Helsinki City Museum.

With so many good points, the icy winters may be the only deterrent.  However, a surplus of exceptional education facilities, great accommodation, efficient public transport, a thriving economy, many cultural highlights, and a low crime rate make Helsinki a great place for expats and their families to live.  The range of residential areas and fast-moving rental properties will offer a challenge to newcomers, but the services of an experienced, expert relocation agent will overcome many of the challenges and make your move smooth and hassle-free.