Are you moving to Vancouver? Consistently rated as one of the most liveable cities in the world, Vancouver is the 3rd most populous city in Canada and has become one of the fastest growing in the country, mainly due to its strategic alliances with East Asian economies.  With great education facilities, sporting activities to die for, a skilled workforce and a quick trip to escape the confines of the city, this is one of the best cities worldwide for expats.  The entire metropolitan area is known as Metro Vancouver.

Our free, in-depth Moving to Vancouver report includes info on:

Surrounded by water on three sides, the city is built on a large peninsula occupying the south-west corner of British Columbia and is located between the Pacific Ocean and the Coast Mountains.  Vancouver Island, situated across the Strait of Georgia, shelters the city from the ocean.  Urban parks and green beltways offer an abundance of outdoor space for residents, with breath-taking views of the North Shore Mountain range.

The public transport system is world-class and efficient and consists of trains, buses, the SkyTrain, the SeaBus and ferries.  TransLink operates the bus network, the SeaBus, the SkyTrain and the West Coast Express commuter trains.  Two companies operate ferries across False Creek, to the south of the downtown area.

The busiest bus routes run from 5am to 1am, along with a limited service NightBus during the early morning hours.

The SkyTrain is completely automated and offers services from the city centre to the suburbs.  The Millennium Line and Expo Line run south-east from the city, the Canada Line runs from the downtown area, then splits to the airport and to Richmond in the south.  Totally wheelchair accessible, the service is linked with the bus service at most stations.  Trains depart every two to five minutes, starting at 5:30am until 1am.

The unique SeaBus is a passenger only service, fully wheelchair accessible, connecting Waterfront Station in the city to Lonsdale Quay on the North Shore, a trip taking 12 minutes.

The West Coast Express links the outer suburbs to the centre.  While it is part of the transit system, fare structures differ, and it offers five departures to the city in the mornings and five back in the evening, weekdays only.

The Aquabus and False Creek Ferries run up and down the inlet from 7am until 10pm.

Vancouver International Airport (YVR), is 9 miles from the city and typically 30 to 40 minutes by road in traffic.  The SkyTrain’s Canada Line links YVR to the city, a trip of just 26 minutes, stopping in the city and ending at Waterfront, the terminus.  All the normal car rental agencies and metered taxi services have facilities at the airport.  This busy airport handles up to 20 million passengers per annum.

Traffic congestion has been rated at the worst in the country.

The cost of living is on the increase, inflated by the exorbitant cost of rental accommodation. Demand overshadows supply in the Metro area, making house-hunting challenging.  Following the global trend, living becomes cheaper further away from the city centre in the suburbs.  The extensive public transport system ensures a quick and easy commute to the downtown area. 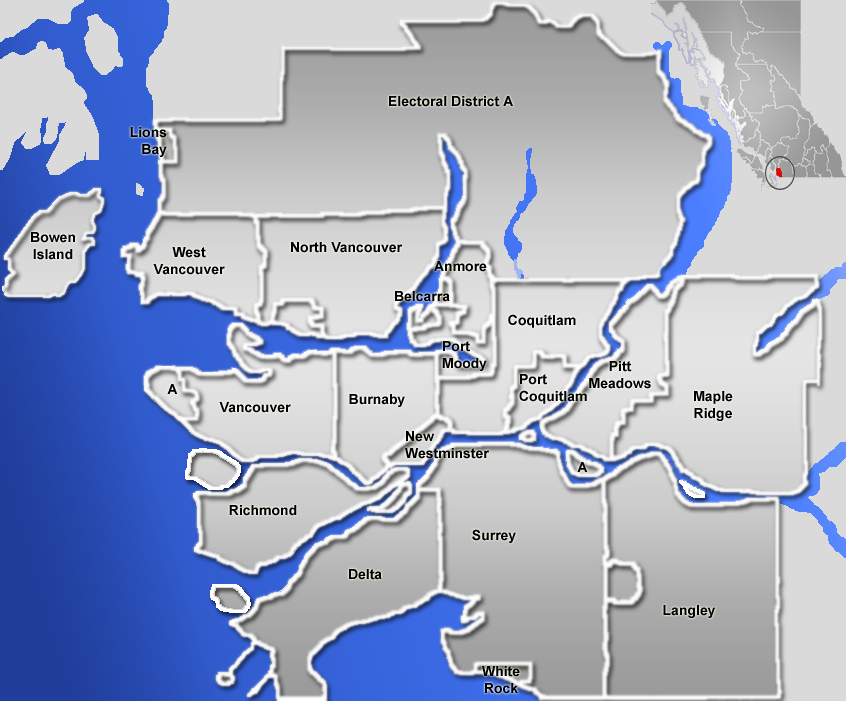 Central has the most popular neighbourhoods in the city, with high-rise commercial and residential properties giving this area a lively feel.  Other locations to the west and in North Shore, over the bridge, also rate highly.  The West End (not the West Side) is exclusive and expensive, while Eastside’s gentrification is slowly transforming this high-poverty area with a high crime rate to a more liveable district.  Coal Harbour was once a harbour with a business district but has recently undergone a transformation to a residential, high-rise enclave catering mainly to young professionals.

Made up of a number of multicultural and diverse neighbourhoods, it is mainly Downtown Eastside which deters many new potential residents from moving in.  However, Strathcona, an area popular with Chinese families is one of the city’s oldest residential areas, made up of mainly rental apartments and houses.  Mount Pleasant, which is close to the city centre, is a typical mix of business and residential properties.  Known locally as The Drive, Commercial Drive in Grandview-Woodlands is home to a rich range of cultures that place great emphasis on green living and the arts.  Other family-centric, diverse communities are Hastings-Sunrise and Kensington-Cedar Cottage, safe and friendly, with a quick commute to downtown.

South Cambie and Oakridge are close to the city and offer a wide choice of housing options.  Kitsilano, known for its views, beaches, residential streets, and restaurants near the water, was a ’60s hippy hangout and is now popular with families and urban professionals.  Referred to locally as Kits, this was the birthplace of the popular yoga brand, lululemon athletica.  Kits swimming pool is the only saltwater pool and is nearly three times as long as a standard Olympic pool, at 449 feet.

Affluent West Point Grey and Shaughnessy feature older and more luxurious homes on larger plots.  Shaughnessy was developed for the elite in the 1900s by Canadian Pacific Railways, and if you peek through the tall hedges these old, grand estates can be seen.

A well-established residential district, South Vancouver is definitely a family-oriented community.  Kerrisdale is just 20 minutes from the downtown city area, with the tree-lined streets showcasing in excess of 200 shops and service companies.  It’s a mix of high and low-rise apartments, newer houses and older, more gracious homes, many of these structures and styles which can still be found in the Vancouver Heritage inventory.

Marpole, another multicultural area, attracts newcomers with less expensive rental housing.  Victoria-Fraserview and Sunset house many Indian families, which is evident in the markets and restaurants.  Quaint, leafy streets and parks characterise Dunbar-Southlands, with early 1900s houses and lovely parks geared to the more affluent.

More affordable, with a longer commute into town, many families chose to live in these quieter, more family-friendly areas.

Once the provincial capital, and named by Queen Victoria in 1859, this is still known as the Royal City.  With a friendly community, the close proximity to Vancouver, great shops, annual festivals and its many heritage sites, New Westminster is directly in the centre of Metro Vancouver, overlooking the Fraser River.

Just 40 minutes from Vancouver central, with great links to the international airport, Surrey dates back to 1879.  A strong community spirit, which is heavily invested in the environment, the diverse population includes 43% whose first language is not English.  Surrey is one of the fastest growing cities in the country and is the fastest growing in Metro Vancouver, growing at a rate of 800 new residents every month.  There are 99 elementary schools, 25 secondary and 23 independent schools within the six towns that make up the city.

THE TRI-CITY AREA OF COQUITLAM, PORT COQUITLAM AND PORT MOODY

These picturesque areas are a mix of mountains, rivers, lakes, plateaus and landscaped parks, offering much in terms of outdoor activities.  With some excellent areas, even the grungier districts are being uplifted in order to cash in on the inflated property prices.  Schools are good, there are plenty of shops including all the bigger high street brands, and great transport links, including the SkyTrain.

A quick 25 minutes to Vancouver by road or the SkyTrain, lush parks, major shopping malls, golf courses, theatre and cultural sites, this diverse community is made up of a mixed population, of which 50% don’t speak English or French.  The SkyTrain connects to downtown, Surrey, Coquitlam, New Westminster and Richmond.  Housing options include apartments and houses, mainly suited for families who enjoy community events. Many swimming pools, great sporting facilities, six major, and many smaller, parks, and boating and shoreline activities are also prevalent.  Deer Lake hosts a Haunted Village for Halloween and annual festivals at Christmas and in June.

In the 2016 census, the population of the Metro Vancouver was around 2,463,000, while the actual city houses 631,486.  A diverse population, many people speak neither English or French.  A study revealed that 65% of the population spoke English at home while 17% spoke Chinese with the family.

Vancouver’s port is one of the busiest in the world, making it a global hub for business activities and opportunities.  The economy is stable, and it has the world’s biggest market, the USA, on its doorstep.

Traditional industries in the province are mining, forestry, agriculture and fishing, and the city is one of Canada’s largest industrial centres.  Recently a widespread service sector has been developed, with the film industry becoming a lucrative business for the metro.  Software and biotechnology continue to advance and grow, with the city on the brink of becoming a global player.  Botox was invented in Vancouver.

The highest paid sectors are mining and utilities such as electricity, with lower salaries in food services, accommodation, entertainment, arts and recreation industries.

Tourism remains an important industry for the city, with over a million visitors a year viewing the natural wonders and enjoying the various sporting activities.

With a lower than average crime rate, good salaries and lovely accommodation options, Vancouver remains in the top tier of places to live.

With a great reputation for education and a very high quality of life, Vancouver is one of the ultimate destinations for expats.  State schools operate on the catchment system, so it’s important that you live near your school of choice.

This beautiful city, sandwiched between the Pacific and the mountains, offers a high quality of living, good salaries and accommodation, magnificent mountain ranges, great beaches, cultural outlets and efficient public transport systems.  A lower-than-average crime rate, diverse suburbs ranging from lively to family-centred, a thriving economy with strengths in tourism, mining, agriculture, fishing, IT and high-tech, all make this a destination of choice for expats.  Relocating yourself and your family is a busy and somewhat confusing time.  Ease the pressure by employing the service of a specialist in the relocation industry, an expert to guide you through lease negotiations, school enrolment, accommodation and much more, and ensure a smooth, hassle-free move.